I Kill Giants is an odd little film (based on the comic of the same name) about Barbara (Madison Wolfe), who has created a fantasy world inspired by her love of Dungeons & Dragons and the career of former baseball pitcher, Harry Coveleski—which is an apparently strange combination. She believes that giants are coming to attack her home town, and she spends her days creating weapons and traps to kill them because it is her responsibility to stop them when they show up. The story opens with Barbara testing different concoctions as giant bait. 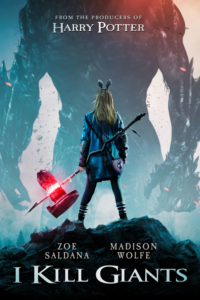 Like I said, it’s an odd little film. Barbara is convinced that giants are real and they are coming, disguised as storms and earthquakes. She sees signs everywhere, in dark clouds and sinister flocks of birds. Even her best (and only) friend Sophia (Sydney Wade) thinks she is crazy and she has mandatory sessions with Mrs. Mollé, the school psychologist (Zoe Saldana) because everyone else does too.

Unfortunately, to say any more would be to give it all away, but the plot twist packs a worthwhile parental punch, even if the overall pacing is a little uneven.

Me: It was weird and moody, and I’m fine—I just have something in my eye.