As always, I’m a bit late to the party, but this week I finally went to see Solo: A Star Wars Story. Based on the fairly average (and sometimes gleefully negative) media coverage I wasn’t expecting much, but it was… pretty good, actually. 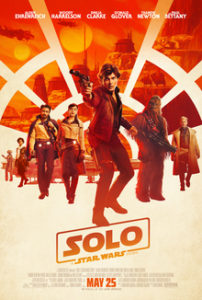 Alden Ehrenreich was a decent Han Solo, successfully pulling off some of Harrison Ford’s mannerisms and swagger; Emilia Clarke was good as Qi’ra; and Donald Glover was almost channelling Billy Dee Williams as Lando Calrissian. It will be interesting to see if the rumours of a Lando-led movie pan out, because I would definitely go and see that based on this performance. Maybe the other two characters will also make another appearance. Who knows?

And if Woody Harrelson wants to be in your movie, always say yes. He was just the right mix of slimy and charming that he does so well. Apparently, his character of Tobias Beckett was based on Long John Silver from Treasure Island, but I can’t say I picked that at the time.

While Solo is certainly not my favourite Star Wars movie (The Empire Strikes Back) or even my favourite of the “new” movies (Rogue One: A Star Wars Story), it has a decent cast, a few nice plot points, lots of over-the-top action, and a large dose of silliness (come on, it’s Star Wars). Overall, I think it also leads fairly well into Han’s character in A New Hope.

However, as fun as it is, Solo does have its problems. There are a couple of cringe-worthy info-dumps at the start, the special effects were a little ropy in places (which was surprising given the budget), and while there is lots of action, overall it just felt a bit safe. It was directed by Ron Howard, and he’s not a director I associate with big risks, so I guess that’s to be expected. He was also brought in as a replacement and apparently re-shot 70% of the film, so it’s not surprising the whole thing is a little uneven.

It’s worth seeing, though. I’d be happy to watch it again when it comes to TV.