For those of us of a certain age, Sabrina Spellman has always been Melissa Joan Hart’s incessantly perky and upbeat version from the 1990s TV show “Sabrina the Teenage Witch”. 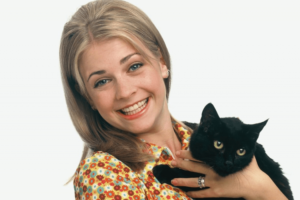 I started the series thinking that it might be one Miss 14 and I could watch together. It’s not. This new Sabrina is definitely not the old Sabrina. 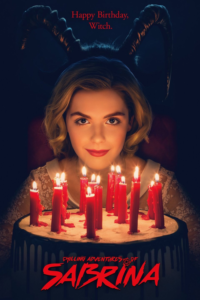 “Chilling Adventures of Sabrina” follows sixteen year old Sabrina as she tries to reconcile her dual nature as a half-witch, half-mortal while fighting the evil forces that threaten herself, her friends, her family and the town she lives in. It’s dark, bloody and macabre with a collection of nasty characters trying to do horrible things, including devil worship and murder—and that’s just by the good guys!

Luckily, the show is a little tongue-in-cheek and totally aware how camp and fun it is. I really liked it. Kiernan Shipka is great as Sabrina and Michelle Gomez is over-the-top amazing as Madam Satan.

However, be aware it is rated 16+ on Netflix and deserves it.

In a good way.